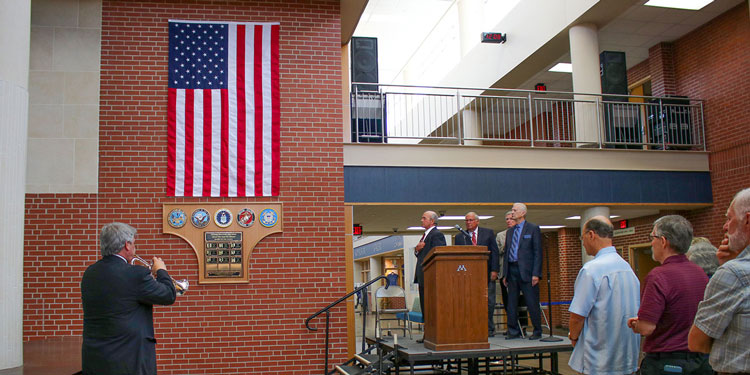 A memorial plaque honoring nine Minnetonka High School graduates who were killed in action while serving in the U.S. military was unveiled on July 28, 2018, in tandem with the 5th annual Minnetonka All-School All-Class Reunion. Over 200 friends, family and Minnetonka staff members attended the event to proudly show that these brave veterans will always be remembered as Skippers.

The idea for the memorial began when one of the nine honorees, Marty Benson '63, was inducted last year into the Skippers Hall of Fame for his athletic achievements. When Marty's classmates heard that he was receiving an Alumni Award, some thought it must be related to him giving his life for his country. Marty was actually being recognized for winning the 880-yard race at the state track meet in 1963, shattering a 21-year-old record.

The memorial is located in the MHS Commons and features the American flag, the five military service emblems and a memorial plaque with brass plates engraved with photos and names of the nine honorees.

Superintendent Dr. Dennis Peterson spoke at the event, noting that this memorial will have a lasting impact. "It is giving great honor to Skippers of the past. However, this memorial will immediately give meaning to the present and future students as well. This is a reminder that freedom comes at a high cost. Present and future Skippers will know their names and their sacrifice."

Make a Donation BY MAIL

Order transcripts online. There is a $5 fee, payable online.

Get Social With Us